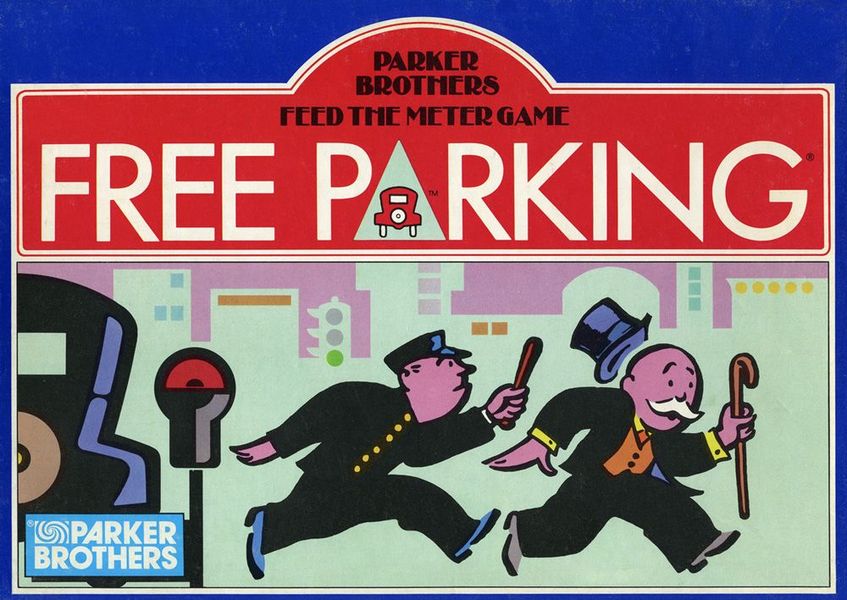 Free Parking debuted in 1988. It was designed by Charles Phillips. It is one of the games that uses the Monopoly IP, but it is not a Monopoly game. Free Parking has a subtitle, "Parker Brothers Feed the Meter Game." And that is just what it is. It is a game of hand management. You use your hand to manage the time on your parking meter. In order to complete your tasks, you must have time on your meter. The first person to score 200 points (or minutes) wins.

To set up, each player is given a meter. These are top-notch in production quality, especially considering that this game came out over 30 years ago. The copy I bought came from a neighbor and Facebook Marketplace. I think I paid $5. The box was a little worn, but the game itself was in fantastic shape. The meters are a thick cardstock with a dial. The dial goes from 0 – 60 minutes. When it is in on 0 minutes, it shows “VIOLATION” on both sides. Your opponents will always know how many minutes you have available.

Shuffle and set aside the Second Chance cards. Now, these are orange and exactly the same as the old Monopoly Chance cards. Shuffle and deal 5 of the Playing Cards to each player. Select a first player however your group deems fair or left of the dealer as the rules instruct.

On a turn, the active player may:

Or, the active player may discard three cards and draw three new ones AND draw a Second Chance Card.

So, playing a card is simple. You can either play a Feed the Meter Card and advance the time on your meter the allotted minutes (never to exceed 60 minutes), or you play a Point Card and reduce your meter the time spent running the errand. You must have enough time on your meter to cover the time needed. If you only have 20 minutes showing, you cannot play a 30-point card. The third type of card is the Special Parking Cards. There are four different Special Cards, each having four copies. So, 16 of the 90 cards are Special Cards. That is only 7%. I bring this up because it seemed that The Son always had one to play against me, or for himself. ALWAYS.

The Officer Jones card can be played at any time, even not on your turn. It makes the player it was played against discard one of their played point cards. The hitch, it can only be played against a player in “Violation,” meaning they have no time on the meter.

The Free Parking Card is played in front of the player who drew it. It saves this player for one full round from being harassed by Officer Jones Cards. Then, before discarding the card at the start of your next turn, you also get to play any point card from your hand regardless of the time on your meter.

Next, the Time Expires Cards is played against an opponent and that meter is drained to 0 minutes.

Lastly, Talk Your Way Out of It cards are like a Get out of Jail Free card. If someone plays an Officer Jones card, or a bad Second Chance card comes up, or any other hostile action card is played, you are free from its effects.

This then brings us the Second Chance Cards. These little, seemingly harmless cards are havoc-wreakers. They are never required to be drawn at the end of a turn, BUT, if you choose to draw one, once it is drawn, it must be played and followed. They could cause you to give an opponent a point card, or instruct you to take a point card from an opponent, Officer Jones might appear, time could expire for someone or everyone, or you could even be directed to change seats and cards with an opponent. This last doozy made me change seats with The Son, who then played a card that I had in my hand to win the game. Frustrating! But, it was my choice to draw the card.

The artwork looks like it was lifted straight from Monopoly itself. It fits the theme and mechanics of the game perfectly.

Free Parking felt a lot like Mille Bornes. You were playing point cards trying to reach a goal while hindering your opponents from doing the same. The meter was a fun gimmick that did not feel pasted on. As I mentioned earlier, it was a high-quality game piece. Overall, The Son and I enjoyed Free Parking very much. I can even see myself getting The Wife to play as well. She loves Mille Bornes. I do not think this will replace Mille Bornes, but Free Parking was well worth the $5 I spent on Facebook Marketplace, and I recommend trying to track a copy down yourself if you like Monopoly and/or Mille Bornes. 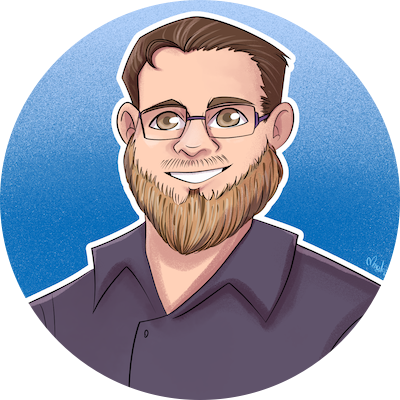 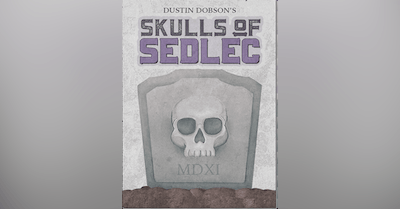 When I set out to play every game on my Shelf of Shame, I did not count all the print and play games on my hard drive. I tried to stick to games that I o… 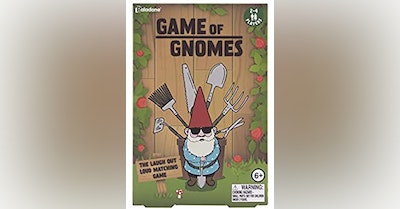 I received this game for Christmas. I love garden gnomes. I love games. This is an oddly specific intersection of these two loves. Game of Gnomes is a fa…